Stage 11: Cavendish Has No Competition 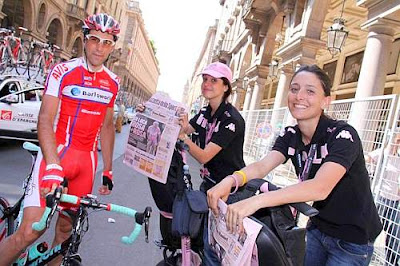 ARENZANO (Genoa), 20 May2009 - Mark Cavendish has won the eleventh stage of the 100th anniversary of the Giro d’Italia, from Turin to Arenzano, 214 kilometres. The 23-year-old racer from Columbia-High Road easily sprinted past the American Tyler Farrar (Garmin), providing an encore to his victory in Milan. It is the fourth victory at the Giro for Cavendish, after those in Catanzaro and Cittadella in 2008, his 10th victory in a season where he won in the debut of Milan-Sanremo. Third was Alessandro Petacchi, who complained to RAI's microphones about the bad behaviour of Farrar, then Davis and Hinault. Now Petacchi and Cavendish are tied 2-2 for this Giro.

THE DETAILS — The racers took off at 12:17 p.m. The American Horner (Astana) did not start, and after about fifty kilometres the Spanish rider Joaquim Rodriguez (Caisse d’Epargne) withdrew. A fast race: after three hours, the average speed was 45 kph. At km 82 Pozzato and Gatto fell, but they got up again. The same for Leipheimer (km 109). A breakaway of four riders – Donati, Meyer, Cesar, and Grabovskyy – was unable to find room to surge ahead. So Isaichev attempted a breakaway, but Marzano caught up with him and then attempted his own solitary action. On the Turchino, even Marzano was caught by the group: over the Mountain Gran Prix Stefano Garzelli took the lead, then Armstrong. The top riders were all there. Armstrong led the group on the descent, while a technical problems left Pozzato out of the game. There were numerous attempts in the final stretch, but they did not block the sprint.

TOMORROW — One of the most important days of the Giro, and, according to some, the most important: the twelfth stage is an extremely long individual time trial, from Sestri Levante to Riomaggiore. It is 60.6 kilometres full of ups and downs, with two climbs, the Bracco and Termine Passes. The general ranking will not be the same. Not at all.

After the Giro we'll get back to "regular programming": everything from A to Z about Italian cycling. Stories, including cycling trip stories, for the Italian Cycling Journal welcome; contact veronaman@gmail.com.
Posted by Angelo senza la o at 7:32 PM