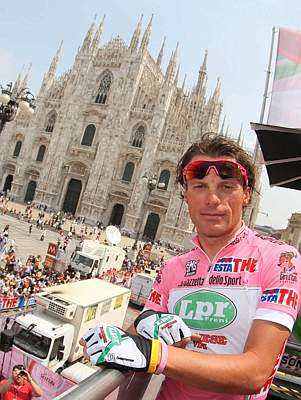 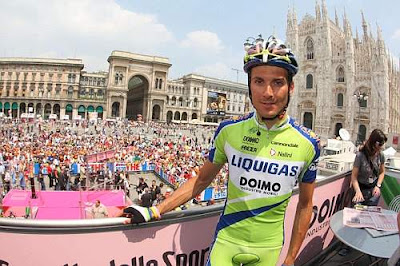 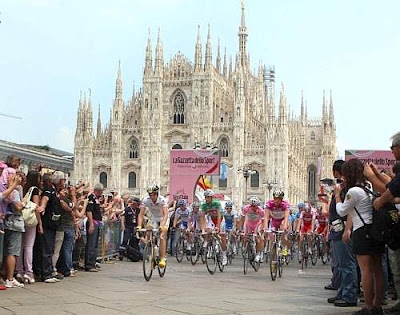 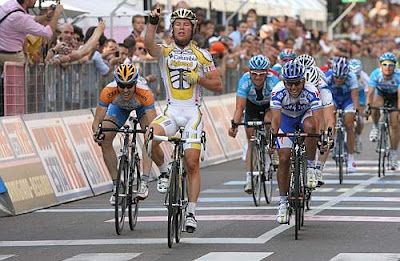 MILAN, 17 May 2009 – Mark Cavendish has sprinted to victory in the 165 km ninth stage of the Giro d’Italia in Milan, convincingly beating Austrian Allan Davis (Quick Step) and American Tyler Farrar (Garmin). The 23 year old king of the Milan-Sanremo from the Columbia-High Road team has thus achieved his ninth victory this season and his third in a Giro after his wins in 2008 in the Catanzaro and Cittadella stages. It is another notch in the pistol of the team managed by Valerio Piva (following victory in the team time trial in Venice), and the third consecutive one after Boasson Hagen’s in Chiavenna and Siutsou’s yesterday in Bergamo. It wasn’t Alessandro Petacchi’s day, as he failed to stay on Cavendish’s wheel and finished only fifth.

THE SITUATION — The stage was neutralised (all riders received the same time) as riders protested what they regarded as a dangerous circuit which they rode at a slow pace with the exception of the last 2 laps. Of the dangers, Mick Rogers of Columbia-High Road said, "Maybe on TV it didn't look dangerous but believe me, IT WAS! No one wants to see a repeat of yesterdays disaster with Horillio. Funny that everyone is blaming the riders for our protest today. No one mentions the parked cars on the circuit, the oncoming traffic, tram tracks in the middle of corners, and people walking onto the circuit."
Thus, the GC thus remains unvaried: Danilo Di Luca leads with 13” over the Swede Lovkvist and 44” over the Australian Rogers, both from the Columbia team. These are followed by the American Leipheimer (Astana) at 51”, the Russian Menchov (Rabobank) at 58” and Ivan Basso (Liquigas) at 1’14”. The other big names are placed as follows: 7th the Spaniard Carlos Sastre (Cervelo) at 1’24”, 9th Franco Pellizotti (Liquigas) at 1’35”, 11th Gilberto Simoni (Diquigiovanni-Androni) at 2’09”, 21st Damiano Cunego (Lampre-NGC) at 3’37” and 25th the American Lance Armstrong (Astana) at 4’39”.

TOMORROW — Monday is the first rest day of this year’s race. The 92nd edition of the 100 year old Giro d’Italia continues apace on Tuesday with the 262 km Cuneo-Pinerolo tenth stage, the longest in this year’s course, and one which recalls Fausto Coppi’s famous solo breakaway in 1949. Traffic problems have meant that the original route has had to be changed (see http://italiancyclingjournal.blogspot.com/2009/04/stage-10-cuneo-pinerolo-modified.html) but it includes the "Cima Coppi", the highest peak in the race.

After the Giro we'll get back to "regular programming": everything from A to Z about Italian cycling. Stories, including cycling trip stories, for the Italian Cycling Journal welcome; contact veronaman@gmail.com.
Posted by Angelo senza la o at 12:15 PM