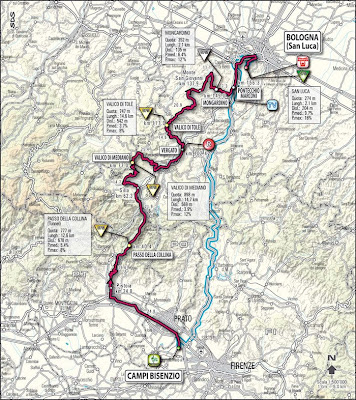 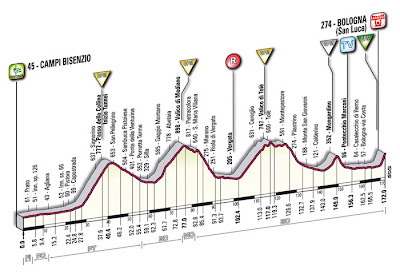 Saturday, 23 May, 2009, Stage 14 official description:
This stage involves the scaling of the Apennines, with the riders departing from the Florentine suburbs and arriving in Bologna and the highly evocative location of the Colle della Guardia, home to the Sanctuary of the Madonna di San Luca.

Campi Bisenzio, which takes its name from the original extension of the ‘campi agricoli’ (‘agricultural fields’) alongside the River Bisenzio that passes through it, is located more or less halfway between Florence and Prato. It is an industrious and heavily populated town with various manufacturing businesses, many of which involved in advanced technology and well balanced in terms of size, shopping centres and advanced tertiary centres. The project to restore local historical buildings, well integrated in the urban fabric, has been a great (and clearly visible) success, as has that of exploring the potential of public green areas to improve quality of life. The Rocca Strozzi is the town’s most symbolic building. Well worth a try are some of the traditional local dishes such as the various forms of ‘pecora alla campigiana’ (stewed sheep), ‘roventino’ (a fritter made from pig’s) and ‘ranocchi’ (frogs), either fried or in egg. The patron saint of the city is the Blessed Maria Teresa Manetti, known as “la Bettina”. This year marks the hundredth anniversary of her death.

Local clubs and activities underline the town’s passion for cycling. Of particular interest is the Carabinieri Barracks Trophy, which pays tribute to the force's commitment to cycling, among other things.

This stage is fairly demanding with the gradient of the land changing continuously. From Prato, an industrious town at the forefront of cycling with its high-profile G.P. Industria e Commercio race, it is on to Agliana in the province of Pistoia, and then to Pistoia itself with its valuable, time-honoured monuments. Capostrada, the next destination, is the birthplace of two-time Milan-Sanremo winner, Loretto Petrucci. The entire area has always been a real hotbed of cycling. Next is the climb towards the Collina Pass, with the riders passing through the tunnel before descending towards Sambuca Pistoiese, and a stretch in the province of Bologna through the well-known town of Porretta Terme. They then head back uphill towards Gaggio Montano (the former home of the Saeco team), and after crossing into the province of Modena at the Mediano Pass, they return almost immediately to the province of Bologna via Vergato. The village of Riola di Vergato is home to the well-known church designed by Finn Alvar Aalto. Here, another uphill climb begins towards the Tolè Pass, Calderino, the sprint at Mongardino, Sasso Marconi and then Pontecchio where, at the end of the 19th century, Bolognese Nobel prize winner Guglielmo Marconi carried out his first wireless telegraph experiments that would later lead to the first radio transmissions. An intermediate checkpoint is scheduled here. Finally, it is on to Casalecchio di Reno on the outskirts of the city famous for its two towers.

The route winds past the glorious municipal stadium named after Renato Dall’Ara, chairman of Bologna football club the last time they won the Italian title, before entering into via Saragozza and the city’s characteristic portico-lined streets. Then the climb up to the Madonna di San Luca, Bologna’s most important sanctuary. A brief but demanding sprint then follows that the competitors will be quite familiar with as it has for years marked the conclusion of the Giro dell’Emilia, the stand-out classic among the numerous races organised by the Gruppo Sportivo Emilia presided over by Adriano Amici. Many great names and moments in cycling history are connected with the city of Bologna, the first stage finish location in the first Giro d’Italia which, departing from Milan on 13 May 1909 and 397 km in length, was won by Dario Beni. Since then, the stage finishes in Bologna have been won by Dortignac, Beni again, Borgarello, Alavoine, Girardengo (twice), Belloni, Ferrario, Binda, Olmo (twice), Bizzi, Coppi, Pasquini, Maggini, Giorgio Albani – another legend of the Giro d’Italia -, Stolker (1st half-stage) and Gaul (2nd half-stage – uphill time trial at San Luca), in 1956 and, again at San Luca, Argentin in 1984. There were two stages in 1994 when the Giro begun in Bologna. The race stage was won by Endrio Leoni whilst De Las Cuevas took the spoils in the time trial.

The important administrative capital of Emilia-Romagna is a key crossroads and centre of international industry and trade that also reverberates in its monuments. The Garisenda and Asinelli towers, the gothic basilica of San Petronio, patron of the city, the Palazzo Comunale and that of the Notai, as well as the Pinacoteca Nazionale, are among the most prominent places of interest. Bologna is also known for its fervent cultural activity. The University is the oldest in Italy (dating from the 16th century), hence the city’s nickname of “la dotta” (‘the learned one’), the quality of life is traditionally very high, and it is well known for its food and related sectors. It is a good life in the city of San Luca.

After the Giro we'll get back to "regular programming": everything from A to Z about Italian cycling. Stories, including cycling trip stories, for the Italian Cycling Journal welcome; contact veronaman@gmail.com.
Posted by Angelo senza la o at 12:58 PM