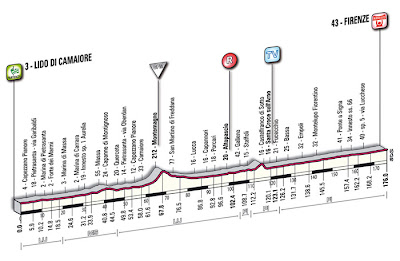 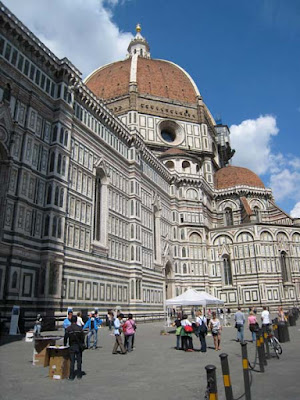 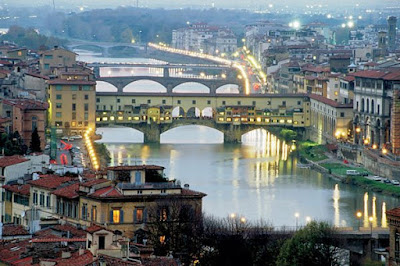 Friday, 22 May, 2009, Stage 13 official description:
After the time trial, the Centenary Tour restarts again from Tuscany. From the sea of the Lido di Camaiore to the administrative capital of the region and city of international renown, Florence.

A stage that, in terms of its altitude profile, offers a degree of respite following the intensive and demanding time trial the day before.

Camaiore, and its Lido of the same name, thus renews its acquaintance with top-class cycling, underlining a passion for the sport that sees it hold the Camaiore City Grand Prix every year at the beginning of August with the traditional circuit of Monte Pitoro – practically a football stadium – and the Sport and Culture prize in the winter, where cycling often plays a leading role. The team time trial won by Carrera in 1987, Missaglia’s victory in 1997, Belgian Verbrugghe’s triumph in 2002 and, most recently, Napolitano’s sprint win from McEwen and Petacchi (who lives here) in 2007, are the details of Camaiore's previous Giro appearances.

The stage begins in Versilia, with its spectacular landscape comprising large sandy shores, gentle hills and the majestic backdrop of the Apuane Alps and the marble that composes them. Forte dei Marmi, Marina di Carrara, Massa, Querceta – a kind of homage to one of the “senators" of the Giro, Giacomo Fini -, Capezzano Pianore, and Camaiore town where, in the village of Nocchi, former amateur world champion and great sprinter Francesco Chicchi, was born. Then it is on to Montemagno and, following the Freddana road, towards Lucca, a town rich in history and various landmarks. Capannori, the most populated municipality in the province of Lucca, Altopascio, which brings to mind 100 km Olympic gold medal and Vuelta Espana winner Marco Giovannetti, and then the province of Florence. Galleno evokes memories of Luca Scinto whilst Fucecchio was the hometown of Andrea Tafi and, in other spheres, Indro Montanelli. The great journalist and writer was also a special correspondent at the Giro d’Italia and always showed great interest in cycling. The peloton then moves on to the large town of Empoli and Montelupo Fiorentino which, with its famous ceramics, brings to mind the Montelupo GP, a professional race held between 1965 and 1984 on the initiative of Franco Bitossi, the extrovert “crazy heart” cyclist who enjoyed a long and successful professional career, and who hails from the area. The entire area covered by the stage lives and breathes cycling with extraordinary passion and active participation. After Signa, it is into the Florentine streets and on to the finish line which, by tradition, is located in the stunning Cascine area, home also to an eye-catching velodrome.

Florence hosted a stage on the first Giro, won by Ganna, who would do likewise again the following year. Galetti, Girardengo, Brunero, Gay, Binda, Maini, Olmo, Guerra, Bergamaschi, Bartali (two hometown victories for this legendary cyclist), Bizzi, Renzo Zanazzi (twice), Conte, Alfredo Martini (team manager par excellence), De Santi, Corrieri, Ciampi and Binggeli were the stage winners here prior to 1965, some of whom on two occasions. In more recent times, Trento’s Francesco Moser won his first Giro stage here in 1973 before repeating the trick in the opening time trial in 1979, whilst Freuler (1984), Piasecki (1989) and Zabriskie (2005) have also triumphed on this stage.

With its fascinating artistic treasures, cultural heritage and tourism that attracts visitors from all over the world, Florence will be impatient to welcome the Giro d’Italia and the pink jersey holder as well as the eventual winner.

After the Giro we'll get back to "regular programming": everything from A to Z about Italian cycling. Stories, including cycling trip stories, for the Italian Cycling Journal welcome; contact veronaman@gmail.com.
Posted by Angelo senza la o at 3:16 PM