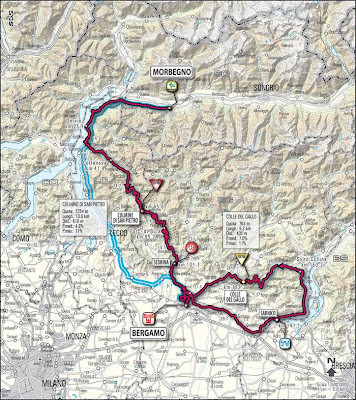 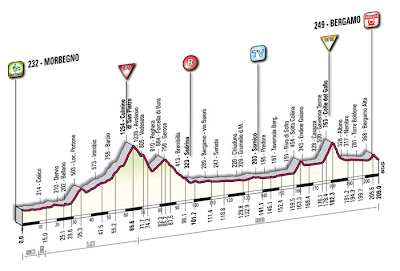 Saturday, 16 May, 2009, Stage 8 official description:
The Morbegno to Bergamo stage takes place entirely in Lombardy. Still in Valtellina, the stage gets underway in Morbegno, the town’s first appearance at the Giro d’Italia since, when the 14th stage beginning in Turin concluded here. Victory that day went to Franco Ballerini, the current manager of the Italian national cycling squad, and proved to be his only stage win in the Giro, although the powerful road specialist was strongly affected by a pollen allergy at the time. The following day saw the Morbegno-Aprica stage.

This important town in the Lower Valtellina, at the outlet of the Val Gerola, is home to a wide range of economic activities with its mechanical, textiles, and food industries. Also of particular note are the agricultural and cheese (the famous bitto) industry, and other significant specialities.

The architectural styles visible in the town centre are typical of those found in the inhabited areas of the Valtellina, with a number of significant artistic works found above all in religious buildings. Morbegno also marks the beginning of the road that leads to San Marco Pass, which connects Valtellina with Val Brembana, in the province of Bergamo, a road that has featured several times in the Giro d’Italia in the last few years.

This time, however, the route heads towards Colico, at the beginning of Lake Como, skirting the eastern bank and passing under the magnificent Benedictine Abbey in Piona, before reaching Dervio. Aside from the spectacular views it affords of the lake it stands over, Bellano is also known for the horrible left turn that precedes the climb towards Tartavalle, a classic of the Giro di Lombardia. The pack passes through the Valsassina and then, after Moggio, takes on the previously unchartered climb at Culmine di San Pietro – known locally as ‘la Culmine’ (‘the peak’) – under the Grigne mountain complex, which connects the Valsassina, in the province of Lecco, with the Val Taleggio (which gives its name to the famous cheese), in the province of Bergamo. Not too arduous in terms of its steepness, this climb is very winding, as is the descent that follows. Next up is the sprint at Forcella di Bura, Sedrina – birthplace of cyclist Felice Gimondi in 1942 – and then a long stretch through the Bergamo plains via Seriate, Sarnico – towards Lake Iseo -, the slope at Solto Collina, and Lake Endine, before the cyclists take on the climb at the Colle del Gallo, already tackled several times in the Giro di Lombardia. It is then on to Albino, Nembro, Torre Boldone and Bergamo, with the classic ride through ‘Città Alta’ and a sprint at Boccola before arriving in the town centre on the main road, the Sentierone. The ‘città dei Mille’ and its province has long been associated with its passion and flair for cycling. A flair that is also expressed in the economic, productive and cultural activities of Bergamo and its territory.

Diego Marabelli in 1938, Oreste Conte in ’52, Felice Gimondi, ahead of Eddy Merckx, in ’76, Giuseppe Saronni in the half-stage in 1983 and Stefano Garzelli in 2007 are the previous winners of Giro stages to conclude in Bergamo. A city and a province with a wide range of attractions spread across a varied territory that attracts all forms of tourism in all seasons.

In recent years the Giro d’Italia has passed regularly through the Bergamo area, mirroring the initiative of a structured local association - Promoeventi Sport – which promotes the local territory with great expertise. The ‘corsa rosa’ is viewed as an ideal initiative for promoting and identifying the culture, the passion and the various businesses in the zones that it passes through.