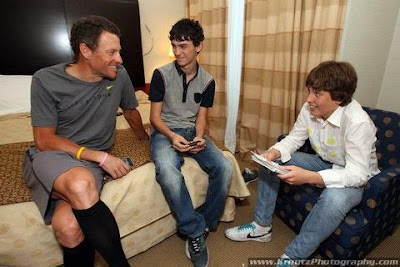 Some of the Italian media have decided to boycott Lance Armstrong's Twitter messages and no longer make reference to his messages in their reports. This comes after Armstrong stopped speaking to the media at the Giro.
Today, Armstrong tweeted, "Who says I'm boycotting the press? Marco Casartelli did an interview for his class project!"
Photo: Lance with Marco Casartelli (center); Marco is the son of Armstrong's Team Motorola teammate Fabio Casartelli who died in a crash on the descent of the Col de Portet d'Aspet, France, during the 15th stage of the 1995 Tour de France.
After the Giro we'll get back to "regular programming": everything from A to Z about Italian cycling. Stories, including cycling trip stories, for the Italian Cycling Journal welcome; contact veronaman@gmail.com.
Posted by Angelo senza la o at 2:14 PM