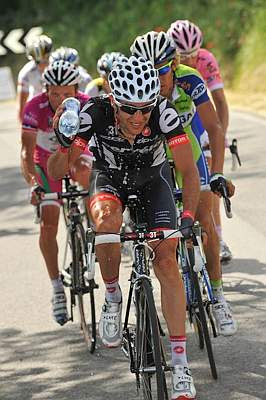 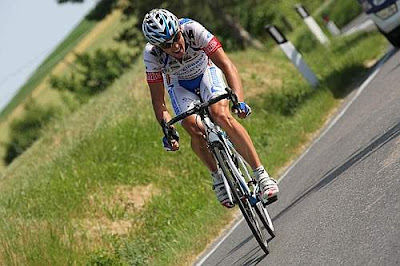 FAENZA, 24 May 2009 - Leonardo Bertagnolli has convincingly won the 161 km 15th stage of the Giro d’Italia from Forlì to Faenza. The race lit up on Monte Casale when Ivan Basso and Stefano Garzelli attacked, but their effort eventually proved fruitless. The 30 year old Diquigiovanni-Androni rider (who hails from Trentino but who lives in the region of Romagna, where today’s stage was fought out) formed part of an early breakaway from the 27 km onwards. Today’s victory was the 15th in this career and his first this season. This was the Diquigiovanni-Androni team’s second triumph in this year’s Giro following Scarponi’s victory in the Mayrhofen stage. In second place in Faenza was the Belgian Pauwels (Cervelo), followed by Bak, Pinotti and Marzano at 50”. Sixth was the Ukranian Grivko at 1’26”. The pink jersey group finished at 1’57”, while further behind at 2’56” were Armstrong and Cunego. Way back was Gilberto Simoni, who is now definitely out of the running.

THE RACE/1 — 178 riders started the stage, this time without Capecchi and Farrar. 16 men broke away after 27 km: Serpa and Bertagnolli (Diquigiovanni), Bak (Saxo Bank), Navarro (Astana), Vorganov (Xacobeo-Galicia), Grivko (ISD-Neri), Pinotti (Team Columbia), Lastras (Caisse d'Epargne), Marzano (Lampre), Pauwels (Cervelo), Eskov (Katusha), Stangelj (Liquigas-Doimo), Facci (Quick Step), Montaguti (LPR), Donati (Acqua & Sapone) and Gonzalez (Fuji). At 50 km from the finish these riders enjoyed almost 6’ over the peloton. The race lit up before the Casale climb when the Liquigas-Doimo team injected pace and split the group, with the big names all remaining up front. On the Casale, during the second of the 8 km climbs, Basso attacked and Garzelli stayed on his wheel.

THE RACE/2 — At the top of the Casale seven riders broke away from the leading pack. These were Bak, Pauwels, Marzano, Bertagnolli, Serpa, Pinotti and Navarro. Basso’s pressure began to pay dividends and both he and Garzelli were now 2’20” behind these leaders. Most importantly, however, they had a 40” advantage over the pink jersey group, and by the time they had reached the descent before the Trebbio (the last king of the mountains climb) this advantage had widened to 1’15”. On the peak of the Trebbio, Pauwels and Bertagnolli were out on their own in front of the other pacemakers. Basso and Garzelli, now accompanied by several of the other riders from the early breakaway, were 2’16” behind, whereas Di Luca, Menchov and Sastre were at 3’23”. With 20 km to go, Bertagnolli and Pauwels had a 2’14” lead over Basso, Garzelli, Grivko and Serpa, while the pink jersey group was at 2’50” from the two front men. The Cervelo team car then told Pauwels to slow down and wait for Sastre. At first the Belgian took no heed but in the end acceded, albeit against his will. 15 km from the line, the Basso-Garzelli and Di Luca-Menchov groups reunited, while Bertagnolli pushed for the line unchallenged.

TOMORROW — The 92nd edition of the 100 year old Giro d’Italia proceeds apace tomorrow with the 237 km 16th stage (the most arduous stage in the entire race, mostly over the Marches Apennines) from Pergola to Monte Petrano. The first king of the mountains at Mount Cesane is not too demanding, but is however followed by two first category climbs (Monte Nerone and Monte Catria) before the 10.4 km uphill arrival on Mount Petrano (average gradient of 8%, with a maximum of 13%). This may be the decisive stage of this year’s Giro.

After the Giro we'll get back to "regular programming": everything from A to Z about Italian cycling. Stories, including cycling trip stories, for the Italian Cycling Journal welcome; contact veronaman@gmail.com.
Posted by Angelo senza la o at 11:15 AM