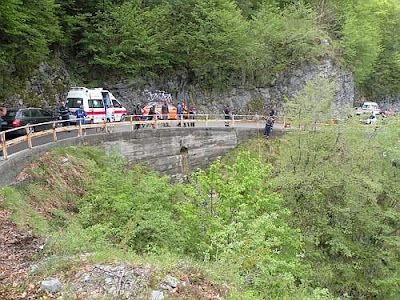 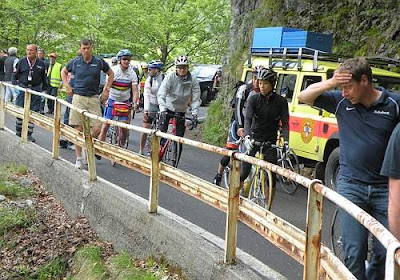 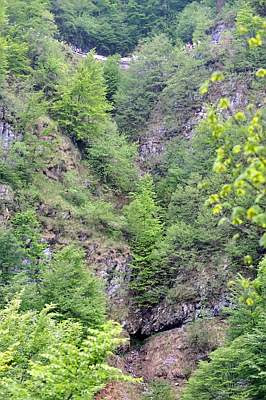 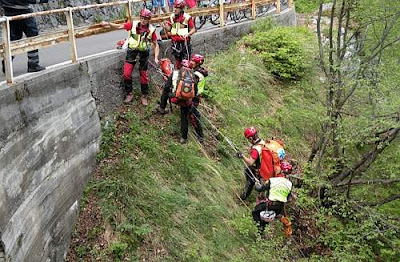 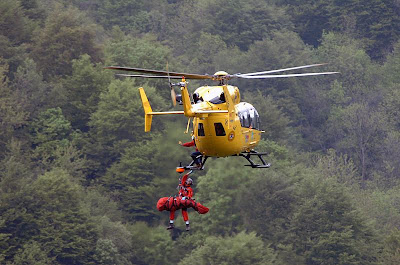 This is the latest report from the Giro organizers:

BERGAMO, 16 May 2009 – It was a very difficult day for the Giro, which almost became tragic. During the descent on the Culmine di San Pietro, about 70 km from the start of the eighth stage, the Spaniard Pedro Horrillo Munoz went off the road during a curve and fell into a ravine. The first people on the scene, including the Director of Rabobank, launched an alarm when they found the bicycle and not the rider, who had fallen over 60 metres further down. To recover him, thanks to help from some hikers, it was necessary to use a helicopter from the Riuniti Hospital of Bergamo and the AREU (Regional Emergency Services), which took off at 2:24 p.m. Paramedic Stefano Alberti provided initial emergency aid, which took 27 minutes. Then the rider was brought up to the road using a winch. Immediately intubated and secured with a brace, Horrillo reached the Riuniti Hospital at 3:30 p.m.

VITAL ORGANS OK — The initial medical update arrived shortly after 5:30 p.m. "Horrillo is in a coma and his prognosis is reserved,” explained medical director Claudio Sileo." Numerous CT scans have shown there is no danger of damage to the brain, vital organs or the spine, but the situation remains serious as a result of several broken ribs, a collapsed lung (immediately drained), the exposed fracture of his femur, and fractures of his kneecap and several vertebrae. BY late evening the medical checks will be completed, and then he will be transferred to intensive care. Race Director of the Giro, Angelo Zomegnan, decided to cancel the musical and dance events of the prize giving ceremony.
Photos: crash site and rescue


Let's pray for his recovery.
Note: Horrillo travelled back home from Bergamo, Italy, on June 2nd after 17 days of recovery; doctors transferred him by air-ambulance to the university clinic of Pamplona.
After the Giro we'll get back to "regular programming": everything from A to Z about Italian cycling. Stories, including cycling trip stories, for the Italian Cycling Journal welcome; contact veronaman@gmail.com.
Posted by Angelo senza la o at 5:53 AM