Stage 13: Three Times is the Charm for Cavendish 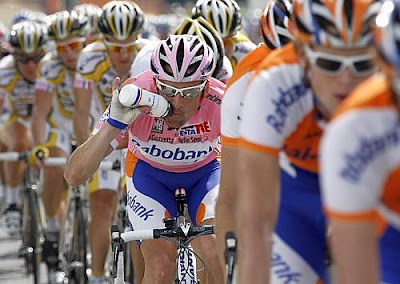 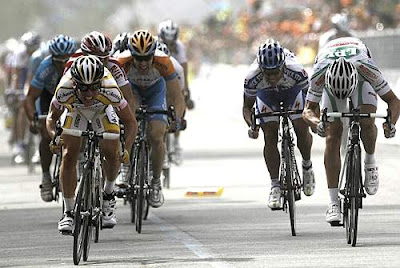 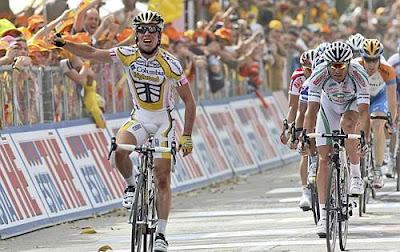 FLORENCE, 22 May 2009 – Mark Cavendish has sprinted to victory in the 13th stage of the Giro d’Italia, from Lido di Camaiore to Florence, 176 kilometres. The 24-year old British rider from Columbia-High Road thus earned his third victory after his wins in Milan and Arenzano, and gained the fifth success in his Giro career after his 2008 wins in Cittadella and Catanzaro. This year, he is 3-2 with Alessandro Petacchi, second today, the winner in Trieste and Valdobbiadene. Davis is also on the podium, followed by Hunter and Farrar. Cavendish, winner of the Milan-Sanremo 2009, has had a total of 11 victories this season.

THE DETAILS — There were no great ups or downs through this stage, and it lacked exciting moments for the play by play. Of note is that Mario Cipollini, in his homeland of Tuscany, took advantage of the calm day to get on his bike and stay with the fleet, reaching the end of the peloton. The race was fast (average speed around 45 kph) and Scarselli, Ignatiev and Schroder attempted to break away after 10 kilometres. They gained a margin of over 5 minutes, but Rabobank and the teams of sprinters drove forward. The first two riders were reabsorbed into the group about 20 km from the finish; Schroder – a German racer from Milram – continued alone and was reabsorbed into the group at minus 5 km. This was the prelude to the sprint.


CONTROVERSY — After the finish, a clash between Farrar and Petacchi. The Italian was accused of bad conduct. "I don’t know what he wanted,” the Italian from LPR said about Farrar. “He said something to me at the end and I told him to go to hell. I was behind Cavendish, Renshaw and Boasson Hagen, they broke away and sprinted past him and I was good in getting second place. You sprint at your top speed, you can’t be looking at every little detail.”

After the Giro we'll get back to "regular programming": everything from A to Z about Italian cycling. Stories, including cycling trip stories, for the Italian Cycling Journal welcome; contact veronaman@gmail.com
Posted by Angelo senza la o at 12:50 PM