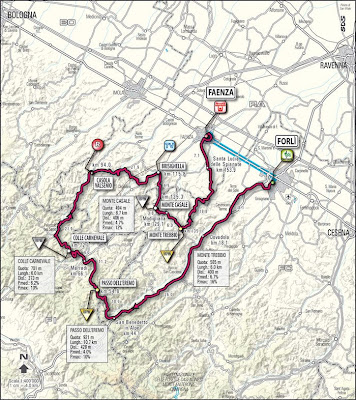 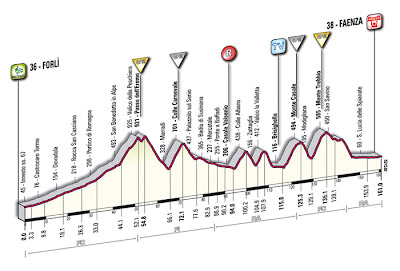 Sunday, 24 May, 2009, Stage 15 official description:
An all-Romagna stage with the route largely located in the province of Forlì-Cesena, although there is a brief excursion in the province of Ravenna with the stage also ending here. The altitude profile, meanwhile, is very segmented, just like a cardiogram. Both cities, just like the rest of Romagna, have a well-documented passion for cycling, and being a Sunday too, all the ingredients are there for a top-class exhibition in which the spectators will offer the cyclists their traditional warm support and enthusiasm.

Once again this year, just as in 2008, Piazza Saffi in Forlì will be the spectacular and spacious start-point for the stage. In recent years this town, with its ancient basilica of San Mercuriale and other architectural, cultural, historical and tourism-related places of interest, connected also to the rich offer of the surrounding area, has intensified its participation in the Giro d’Italia. Tullo Morgagni, chief editor of La Gazzetta dello Sport and one of the “fathers” of the Giro d’Italia along with Armando Cougnet and Eugenio Costamagna, was from Forlì. The town’s stadium, which hosts a magnificent velodrome track named after Forlì-born cyclist of the 1940’s Glauco Servadei, is also dedicated to Morgagni. Not only was this the right decision, it also appeased the impassioned requests of local administrators, motivated and convinced of the curiously effective role that cycling – and the Giro d’Italia in particular – plays in promoting the local area. Then there is the great Ercole Baldini and his Olympic gold, records, the world championship and pink jersey that colour his town and enrich the cycling heritage of Forlì and its surrounding area – also home to Arnaldo Pambianco of Bertinoro (winner of the Giro that marked the hundred-year anniversary of the unification of Italy in 1961) – which, just like the rest of Romagna, continues to be a prolific hotbed of cyclists and cycling fans.

The stage itinerary is segmented and highly variable in terms of its altitude profile with four King of the Mountains. From the start, the pack heads towards the inland hills via Castrocaro Terme – a place that brings back memories of classic individual time trials of the 60’s and 70’s – before moving onto Dovadola, Rocca San Casciano, the Eremo Pass, the descent towards Marradi and the consequent climb back up to the Colle Carnevale. It is then downhill again towards Casola Valsenio, which was home to Faenza-born writer Alfredo Oriani, one of the first poets to write about the bicycle, then uphill to the Colle Albano. Then, continually rising and falling, the Valico la Valletta and the characteristic village of Brisighella before another ascent to Monte Casale and Modigliana, with its numerous bridges and history/Risorgimento museum. Then onto the famous Monte Trebbio, a well-known climb in Italian cycling, particularly for a classic race such as the traditional Giro di Romagna. From the peak of this mountain to the stage end in Faenza, around twenty-five kilometres away, it is all downhill and flat country.

The stage finishes in the elegant Piazza del Popolo, in among its buildings of historical significance. This is the site for the famous Palio del Niballo each year, as well as the conclusion of the important ‘Cento Chilometri del Passatore’ foot race. Of great architectural value are the Palazzo Comunale, the Cathedral, the Pinacoteca comunale art gallery and the International Ceramics Museum.

The area is known for its high-profile production activities, above all those involving ceramics and majolica. So engrained is this tradition – it goes back over a hundred years – that the French term faïence actually derives from the name Faenza. The town’s agroindustrial sector is pretty lucrative, in terms of production, trade and transformation, as are its mechanical and fashion sectors.

The town is the birthplace of Evangelista Torricelli, inventor of the barometer. Also of note is Faenza’s sporting tradition, particularly in the areas of motoring, wrestling and cycling, with plenty of famous names hailing from here or close-by: Aldo Ronconi, Vito Ortelli, Giuseppe “Pipaza” Minardi and, more recently, Davide Cassani, Fabiano Fontanelli and many others, testimony to the town’s passion for cycling – a part of daily life here. Another well-known name in the cycling world to hail from Faenza was Guerrino Farolfi.

Faenza’s previous appearances in the Giro saw victories for Michele Dancelli in 1970 and Norwegian Kurt Asle Arvesen in 2003. It was the 10th stage, departing from Montecatini Terme, an uneven route just like this year’s. Gilberto Simoni wore the pink jersey here, retaining right through to the end of the race.