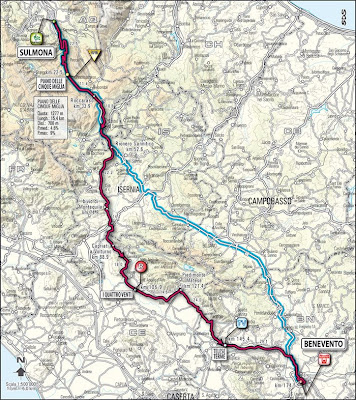 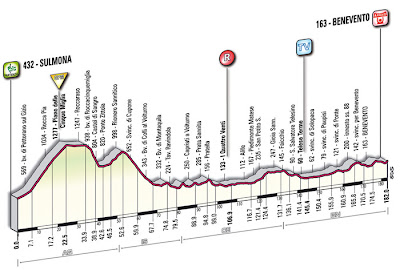 Thursday, 28 May, 2009, Stage 18 official description:
After lots of mountains, the central part of this stage takes the competitors back to the flats and the biggest sprinters will look to take advantage of one of their last opportunities. The stage gets underway in the pretty town of Sulmona in the Peligna Valley, a location whose elegant structure and historic buildings and monuments hint at its illustrious past. Publius Ovidius Naso, one of the greatest Roman poets, was born here. Sulmona is a lively town that has remained true to its traditions and identity through various active institutions and movements in the areas of culture, music and the arts. A disastrous earthquake in 1706 destroyed the architectural heritage that had seen the town nicknamed the “Siena of the Abruzzi”. Sulmona is also renowned for its traditional production of ‘confetti’ sugar-coated almonds, with the sweets still packaged with silk and fabrics in multiple colour combinations. The town’s culinary delicacies are also of the utmost quality.

Sulmona’s relationship with the ‘corsa rosa’ also goes back many years. In 1911 Corlaita beat Frenchman Petit Breton by 7’; in 1925 the Benevento-Sulmona (note the coincidence) 8th stage saw Brunero come home ahead of Girardengo; in ’26 it was the turn of Binda, who repeated the trick again in 1928.

Shortly after the start there is a moderate climb towards the King of the Mountains at Pian delle Cinque Miglia. This is followed by well-known tourist resort Roccaraso, Castel di Sangro, and a further gentle climb at Rionero Sannitico. Having come into the Molise region, the route then takes the riders into Campania at Capriati a Volturno and goes through the zone dominated by the massif of the Matese via Alife, Piedimonte Matese, and Gioia Sannitica. Fairly uneven but nothing too demanding. Then it is Telese Terme, Santa Maria in Strada and Benevento. The course involves a brief circuit of the town before riders cross the finishing line.

The ancient “Maleventum”, transformed into “Beneventum” by the Romans after the victory over Pyrrhus, King of Epirus in 275 B.C., is very interesting from both an architectural and cultural point of view as a result of its long history. Places of interest include the Arch of Trajan, the Cathedral and the annexed Diocesan Museum, the remains of the Roman theatre, and the Samnium Museum. The head town of the proud Samnium population is also noted for its wide and abundant range of culinary delicacies. It is particularly well known for, among other things, the liqueur Strega and its walnuts.

The area certainly has no shortage of cycling fans, yet the only Samnite cyclist to have started and finished the Giro was Giulio Messina way back in 1925. He was riding in the “independent" category, a euphemism to indicate those not assisted by “houses”, as the sports groups of the time were known. In other words, those driven by a passion or a calling, encouraged by their hopes and dreams, that as well as pedalling also had to take care of everything else from lodging and transportation to food. In recognition of the race, Benevento has marked the centenary year by dedicating a piazza to it near the Palasannio.

Those who have promoted the arrival of the Giro in Benevento are extremely passionate and particularly intent on increasing the popularity of cycling among the young. The town has already hosted a number of stage finishes, the most recent seeing Australian Robbie McEwen sprint to victory in 2002. Going back in time, Giuseppe Saronni won here in 1978, whilst in 1973 Roger De Vlaeminck won in a sprint finish from Gimondi and Merckx. In the latter race, a frightened dog ran onto the course around 200 metres from the line, hindering the peloton. Luckily, nobody, including the quick and fortunate animal, was hurt. Another thrilling sprint in 1971 with a huge pile-up ensuing before powerful long-distance rider Ercole Gualazzini from Parma took the spoils ahead of classy sprinters such as Sercu and Basso. Another sprinter, Treviso’s Adriano Durante, was a winner here in 1965, whilst the legendary Girardengo was the first great winner of a Giro d’Italia in Benevento in 1925.

After the Giro we'll get back to "regular programming": everything from A to Z about Italian cycling. Stories, including cycling trip stories, for the Italian Cycling Journal welcome; contact veronaman@gmail.com.
Posted by Angelo senza la o at 7:54 PM