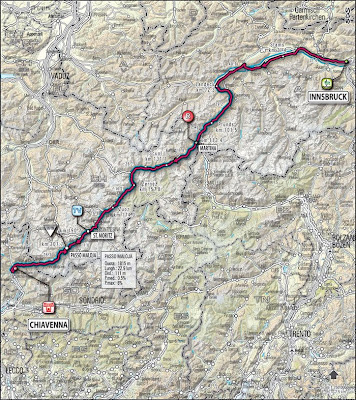 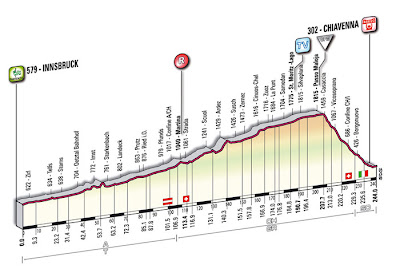 Friday, 15 May, 2009, Stage 7 official description:
Innsbruck is the capital of the state of Tyrol as well as the most important town in the region, a beautiful city whose history finds its origins in the Roman colony of Veldidena. The city lies on the banks of the River Inn (Innsbruck literally means "bridge over the Inn") in a vast valley that is around 550 m above sea level and dominated by the Waldrast Spitze massif (2715 m). The urban area is wide reaching and comprises numerous neighbouring locales, all located around an older centre. Its greatest period of development was the 18th century with the blooming of various industrial activities. The economy is based on the trading of agricultural and livestock products from the surrounding area, and on a variety of activities in other sectors such as textiles, chemicals, food, clothing and glass. Tourism has also always been of crucial importance to the economy, and Innsbruck and its environs have traditionally succeeded in attracting hordes of tourists from all over the world. It essentially acts as the crossroads between a number of major roads arriving from Germany, Italy and Switzerland. Its numerous landmarks include the 16th century Hofkirche, the baroque Cathedral of St. James, the 16th century Goldenes Dachl building, and the imperial palace. Innsbruck is also home to an important and very old university, and boasts a myriad of museums and artistic and cultural initiatives. In 1988 the 16th stage (Merano-Innsbruck) of the 71st Giro d’Italia, won by climber Franco Vona of Lazio, concluded here. The following day, racers disputed the Innsbruck-Borgo Valsugana stage. The Austrian city has hosted two Winter Olympics, in 1964 and 1976, and the multi-purpose sports facilities developed for these events have represented a fine legacy.

The first section of the course, a gentle but continuous climb almost all the way, constitutes a 100 km (or just over) ride through the distinctive orderly green landscape of Tyrol, which leads to Switzerland. The well-known abbey of Stams represents a characteristic landmark. In Martina the riders cross the Swiss border and the canton of Graubünden, where the locals speak Ladin. Scuol, Zernez, Samedan, the well-known St. Moritz with its lake and tourist/society attractions, and Silvaplana are the best-known towns along the route as it passes through this extraordinary mountain landscape. Lakes, forests, almost perpetual snow and glaciers surround the elevated valleys that, distinctive for their flat bottoms, characterise the uniquely beautiful Engadin valley. The peloton is then faced with the Maloja Pass at 1815 m before tackling the steep and demanding descent among the towering mountain faces and thick conifer tree woods. After around a hundred kilometres in Swiss territory, it is downhill along the narrow Val Bregaglia. The riders re-enter Italy in Castasegna, passing through Villa di Chiavenna on their rapid descent from the peaks at Maloja, before reaching the finishing line in Chiavenna.

Chief town in the valley of the same name and a continuation of the Valtellina, Chiavenna is located in the province of Sondrio, very close to the beginning of Lake Como, at the junction of the roads leading to Maloja and the Splugen Pass, towards the holiday resort of Madesimo. Situated on the banks of the River Mera, its economy is based on tourism as well as trade and industry. This is the home of the well-known "crotti", natural caves transformed into rustic taverns used for tasting fairly heavy and flavoursome local foods and wines. Special delicacies include the delicious cooked meats - bresaola in general and, in particular, il violino, a bresaola obtained from the shoulder or thigh of the goat, and slinzega, another type of bresaola - and various types of cheese. Many foods are cooked using the soapstone typical of the area.

The various ages in the long history of Chiavenna, an important junction between Italy and Northern Europe, are suggested by the forms and décor of various buildings. Poet and man of letters Giovanni Bertacchi, known for his deep love of his homeland, was born here.

After the Giro we'll get back to "regular programming": everything from A to Z about Italian cycling. Stories, including cycling trip stories, for the Italian Cycling Journal welcome; contact veronaman@gmail.com.
Posted by Angelo senza la o at 5:22 PM