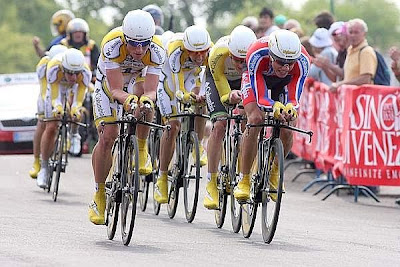 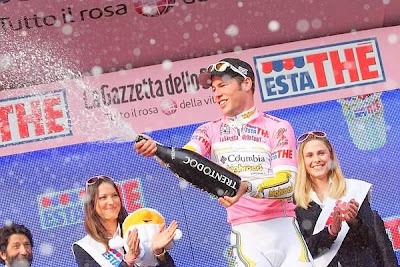 VENICE’S LIDO, 9 May 2009 - Mark Cavendish is the first pink jersey of the Giro d’Italia 2009. The Brit’s team, Columbia-High Road, won the team time trial opening the 100th Giro, 20.5 extremely fast kilometres at the Lido in Venice. The team, headed by Director Valerio Piva, who counts Italians Marco Pinotti and Moris Possoni on his staff, finished with a time of 21:50 (average of 56.3 km/hour). Cavendish – king of the Milan-Sanremo, who has already had 8 wins in 2009 and won two stages of the Giro d’Italia 2008 – was the first to cross the finish line, and also the first British cyclist to wear the pink jersey. Second in the general ranking is Marco Pinotti.
THE OTHERS — Columbia-High Road, the first team to take off at 3:35 p.m. (the last teams had to battle against some adverse wind in the final stretch, ed. note: Armstrong of Astana said "Had ?'s about the wind picking up later in the day. Not much we can do about it, that's racing!We're content."), was followed by Garmin-Slipstream +6 (the winners last year in the team time trial in Palermo). Third place for Lance Armstrong and Levi Leipheimer’s Astana, at +13. Fourth was Di Luca’s team, LPR-Farnese, +22, then Visconti’s ISD, +27 and Pozzato’s Katusha, +35. Seventh, at +38 seconds, was Menchov's Rabobank, eighth was Basso’s Liquigas-Doimo, +40, and ninth was Cunego’s Lampre-NGC, +42.
THE TOP RACERS — Here’s an extrapolated ranking of the top racers: Armstrong and Leipheimer gained 9 seconds on Di Luca, 25 on Menchov, 27 on Basso, 29 on Cunego, 36 on Sastre, 53 on Simoni, and 1:08 on Garzelli.
TOMORROW — the Giro d’Italia continues with the second stage: from Jesolo to Trieste, 156 kilometres. The route lacks significant climbs, and could be a first opportunity for the sprinters, with the much-awaited match between Alessandro Petacchi and Mark Cavendish.
Photos: Team Columbia-High Road, Cavendish in pink
After the Giro we'll get back to "regular programming": everything from A to Z about Italian cycling. Stories, including cycling trip stories, for the Italian Cycling Journal welcome; contact veronaman@gmail.com.