Stage 10: The Di Luca Show On The Climbs 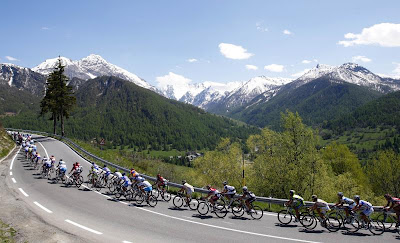 PINEROLO (TO), 19 May 2009 - Danilo Di Luca has sprinted to win the 10th stage of the Giro d’Italia, the longest: Cuneo-Pinerolo, 262 kilometres. The Italian rider from the LPR team, 33 years old, thus provided an encore to his victory in San Martino di Castrozza, obtaining the 8th stage victory in his career at the Giro – which he won in 2007. At +10 Pellizotti, Menchov and Sastre crossed the finish line; at +26 came Arroyo and at +29 a small group including Soler, Basso, Leipheimer, Armstrong and Simoni. Cunego arrived at slightly more than +1:00 and the white jersey Lövkvist was behind.

THE DETAILS — The racers took off with a weight on their hearts due to the accident that took the life of Fabio Saccani, the long-running motorcyclist and driver for photojournalist Roberto Bettini. The first hour flew by at an average speed of 50 kph, with Tiralongo and Bonnafond among the most active racers, but no breakaways took shape, and after 72 km the group was tight. The most important action was by Stefano Garzelli (Acqua e Sapone-Mokambo), who attacked on the Moncenisio. He covered the Mountain Gran Prix with 1 minute on the group (gaining important points for the green jersey which goes to the leader of the mountain stages), and increased his lead on the descent. Counterattacks came at his back. The situation on the Sestriere (Cima Coppi at a height of 2035 m): Garzelli had 3:45 on Visconti and Grivko, 5:08 on Cioni, Cardenas, Serpa and Wegelius, and 5:30 on the pink jersey’s group. At minus 24 km Cioni and Grivko, both with ISD-Neri, caught up to Garzelli, while the other four counter-attackers were reabsorbed into the peloton driven on by Basso and Pellizotti’s Liquigas-Doimo. On the Pramartino climb (15 km from the finish line) Garzelli and Visconti remained in the lead, while the group began to break up and close in on the pace setters. Franco Pellizotti (Liquigas-Doimo) then attempted an attack, with Garzelli and Visconti who returned to their positions. Despite the 100 km sprint, Garzelli tried to stay close to the top racers. At the Mountain Gran Prix (minus 10.5 km): Pellizotti had about ten seconds on the first pursuers, including Di Luca, Soler, Arroyo, Basso, Leipheimer, Menchov, Sastre and Garzelli. The white jersey, Lövkvist, was in dire straits, Armstrong at +20, and Cunego at +1:15. On the descent, a 5-rider group formed in the lead: Di Luca, Pellizotti, Sastre, Menchov and Arroyo. 10 seconds behind were Basso, Leipheimer, Soler and Garzelli, with Simoni and Leipheimer slightly farther behind. On the final climb, the pink jersey even attempted to gain a lead, in an exciting prelude to the finish.

TOMORROW — The 100th anniversary of the Giro d’Italia – 92nd race – continues tomorrow with the 11th stage: Turin-Arenzano, 214 kilometres, with the Passo Turchino in the final stretch, which may give attackers a boost.

After the Giro we'll get back to "regular programming": everything from A to Z about Italian cycling. Stories, including cycling trip stories, for the Italian Cycling Journal welcome; contact veronaman@gmail.com.
Posted by Angelo senza la o at 10:58 AM