Four Cannondale Bikes That Had a Role in Giro History

Ever since they became the first American bike brand to sponsor a Euro team (with Saeco in 1997), Cannondale has had a special relationship with the Giro d'Italia - wininng it four times. They have also come to rely heavily on their Pro teams for R&D feedback. When Cannondale entered the Euro peloton, aluminum bikes had yet to be accepted as steel bikes were still in the majority. A decade later and of course now it is aluminum that has become outdated having been replaced by carbon fiber. 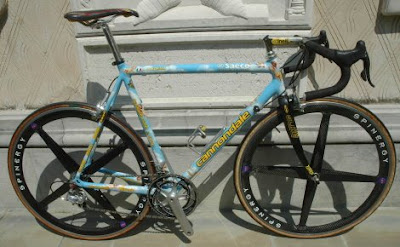 One of the most beautiful race bikes ever was the one raced by Paolo Savoldelli in the 1998 Giro. The array of gorgeous angels meticulously air brushed on the frame make the bike a pure delight to look at. Despite the Cannondale engineers insistence that he was wrong, Paolo insisted that they run a smaller down tube than was standard to help alleviate potential back pain. And so they made a custom frame with a 45mm downtube versus the production 52mm size. The Spinergy wheels and Cinelli stem were icons of the day. 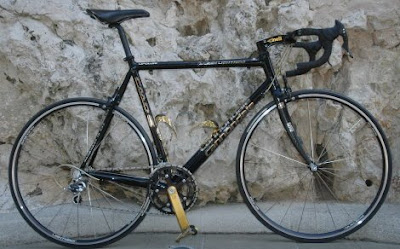 Mario Cipollini's Black Lightning bike from 1999 was the first Cannondale to use what would become the BB30 bottom bracket with the Hollowgram crank. The bike was a fashion statement not only due to Power Pyramid downtube with gold lightning bolts and accented components, but also with the risque photo of Pam Anderson that was pasted on the Cinelli stem (a one-piece welded unit with the handlebar). 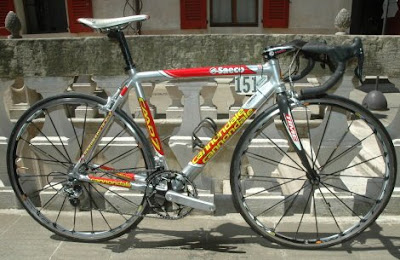 To win the 2003 Giro, Gilberto Simoni insisted on having the lightest bike possible. The small frame used a new proprietary Alcoa aluminum that Cannondale called "Optimo" tubing and it was finished off without either paint or clear coat. This bike was the model for the CAAD 7 frame. 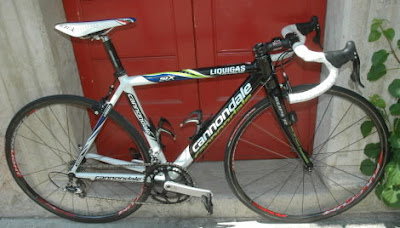 Danilo Di Luca's 2007 Giro winner marked the beginning of a new era for Cannondale. The Liquigas bike was a pre-production System Six frame that used a molded carbon top and down tube mated to an aluminum seat tube and rear triangle. The day of the full aluminum frame from Cannondale would be no more.

Photos and text above: http://www.roadbikeaction.com/ 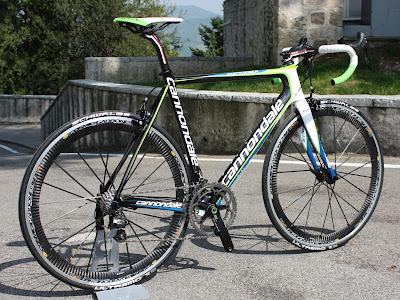 After the Giro we'll get back to "regular programming": everything from A to Z about Italian cycling. Stories, including cycling trip stories, for the Italian Cycling Journal welcome; contact veronaman@gmail.com
Posted by Angelo senza la o at 2:01 PM