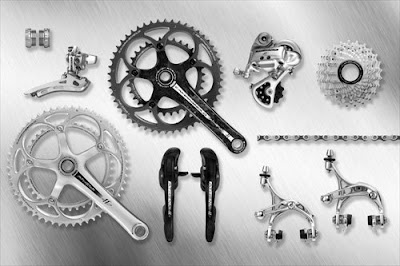 The rumored Campagnolo 11 Speed Athena has now been officially announced during the Giro. The Campagnolo announcement:

"In the past season Campagnolo decided to ramp up the development of the drivetrain and present the new 11 speed groupsets. This technology was developed by racing pros and for racing pros and for the most demanding amateurs. The 11-speed groupset has revealed itself to be something totally new in every aspect. This is because Campagnolo did not simply add a speed, but made a clean sweep of the past and designed all the components from scratch, improving each individual part to create the perfect groupset.

Now, just one year later, Campagnolo has decided to expand the family of 11s groupsets, introducing the Athena 11s, the first 11-speed groupset in alu-style (ed. note: it appears that, at least for the moment, there isn't an alu brake lever option eventhough the levers are in alu but are carbon wrapped). The objective is to make the undeniable performance features of the 11s project accessible to the largest number of people. Athena 11s, in fact, is an extension of the 11s project. The design and technical solutions are the same as those of the other three 11s groupsets: Super Record, Record, and Chorus.

After the Giro we'll get back to "regular programming": everything from A to Z about Italian cycling. Stories, including cycling trip stories, for the Italian Cycling Journal welcome; contact veronaman@gmail.com
Posted by Angelo senza la o at 12:34 PM