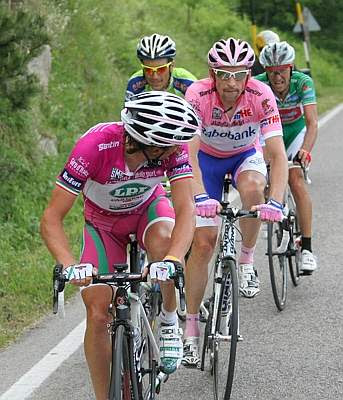 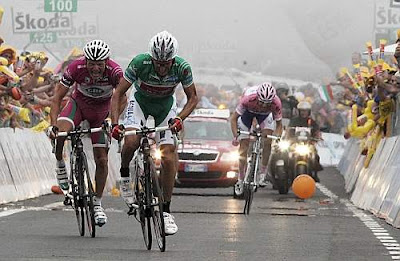 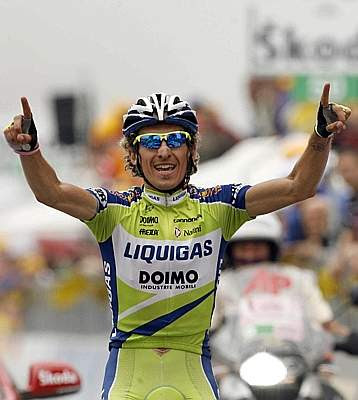 BLOCK HAUS (CH), 27 May 2009 - Franco Pellizotti has won the 17th stage of the Giro d’Italia, 83 kilometres, from Chieti to the mountain finish on the Blockhaus (1674 metres). The 31-year old from Liquigas-Doimo thus gained his first season victory – the 12th in his career – and the first win for his team at the Giro 2009. Pellizotti, who launched his decisive attack 14 km from the finish line, and took 37:20 to climb the Blockhaus (average 24.100), had not had a win since 26 May 2008, when he conquered the uphill time trial of Plan de Corones at the Giro 2008. Second was Stefano Garzelli at +42; third was Di Luca at +43; fourth was the pink jersey Menchov at +48 (who lost a few metres in the final stretch); and fifth was Basso at +57. Sastre, Armstrong, Bruseghin, Simoni, and Leipheimer lost about two minutes.

GENERAL RANKING — Denis Menchov is still the pink jersey, but Danilo Di Luca wore away at Menchov’s lead and is second at +26, waiting for the last uphill finish, Friday on Mt. Vesuvius (do not forget Sunday’s final time trial of 14.4 km in Rome, which, on paper, favours Menchov). Franco Pellizotti rose to third, two minutes behind. Ivan Basso is fourth at +3:28; Carlos Sastre is fifth at +3:30. Leipheimer is sixth at +4:32; Rogers is seventh at +7:05; and Garzelli is eighth at +8:03.

THE DETAILS — The first ten kilometres went by calmly, after the unusual start at 3:00 p.m. Voeckler was the first to attack, and with him were Marzoli, Palumbo, Cardenas, Visconti, Chiarini, Bono, Facci, Rabunal Rios and Fernandez Cruz, while Danilo Di Luca’s LPR-Farnese gave chase. At 25 km from the finish, Sastre’s Cervelo team (despite Deignan’s fall) started to drive on, at 2 minutes from the pace setter. At the start of the climb – 18 km from the finish line – Cardenas was at the head of the group of top riders, who had a margin of 36 seconds at minus 15 km. Szmyd, a team-mate of Basso-Pellizotti, attempted to attack. The group caught up to Cardenas, Pellizotti overtook Szymd and Lance Armstrong attempted to do the same. Polish rider Szymd fell back, and the situation at 13 km from the finish was as follows: Pellizotti had 8 seconds on Armstrong and 30 seconds on the pink jersey’s group, driven on by Francesco Masciarelli and composed of 17 racers. 10 km from the finish, Armstrong was 40 seconds behind, followed by Di Luca, Menchov, Basso and Garzelli at +43. Sastre was slightly further back. At minus 9 km, Armstrong lost contact: Pellizotti had 35 seconds on Di Luca, Menchov, and Basso, while Garzelli fell back but then managed to catch up. At minus 6 km, Pellizotti had 30 seconds on his closest pursuers, Sastre was 1 minute behind. Minus 5 km: Pellizotti had 39 seconds on Basso-Garzelli-Menchov-Di Luca. Sastre and Armstrong dropped back to +1:02. Minus 4 km: Pellizotti had 42 seconds on Di Luca, Menchov, Basso and Garzelli, and +1:18 on Sastre and Armstrong. Minus 3 km: Pellizotti gained further ground: +51 seconds, while Sastre suffered and fell behind Armstrong, Simoni and Szmyd. Slightly before the 2 km mark, Di Luca attacked, but only Menchov stayed with him while Basso fell behind. Garzelli managed to catch up. However, Pellizotti held on to his margin and flew on to his well deserved victory.

TOMORROW — The 100th anniversary of the Giro d’Italia – 92nd race – continues with the 18th stage: from Sulmona to Benevento, 182 kilometres. Aside from the Mountain Gran Prix in Piano delle Cinque Miglia, there are no difficult climbs: a sprint finish is likely.

After the Giro we'll get back to "regular programming": everything from A to Z about Italian cycling. Stories, including cycling trip stories, for the Italian Cycling Journal welcome; contact veronaman@gmail.com.
Posted by Angelo senza la o at 11:45 AM