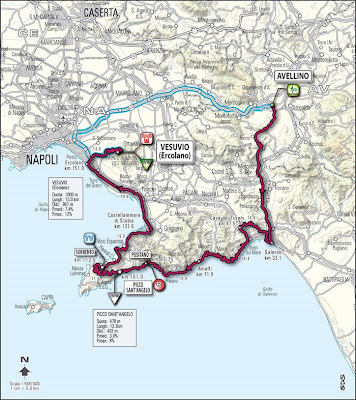 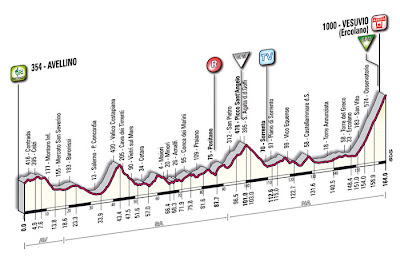 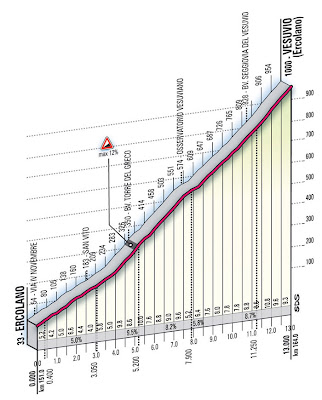 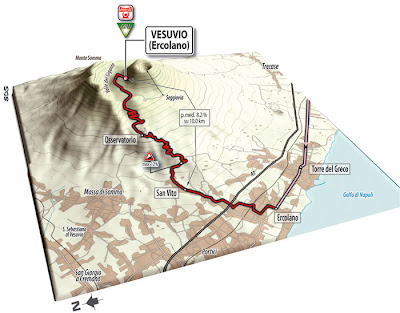 Friday, 29 May, 2009, Stage 19 official description:
The third to last stage of the 2009 Giro d’Italia is once again played out in Campania, amid some quite stunning scenery.

It kicks off in Avellino, the administrative capital of Irpinia, which sits above the green valley of the River Sàbato. Although modern in appearance, it conserves a number of medieval relics in its centre. The Cathedral and the Irpine Provincial Museum are particularly worthy of note. In terms of food and drink, the pasta, hazelnuts, chestnuts and various sausages take top billing. D.O.C. wines include the whites Fiano and Greco di Tufo (also spumante) and the red Taurasi.

The ‘corsa rosa’ first came to Avellino in 1914 with Giuseppe Azzini triumphing. Binda took the spoils in 1927, Dancelli in 1965, and Belgian Freddy Maertens in 1977. There have also been various other stages finishing in close-by Montevergine di Mercogliano.

The route profile is generally uneven but doesn’t present any real great difficulties until the final climb up the slopes of Vesuvius. From Avellino the route heads towards Bellizzi Irpino and Montoro Inferiore (where cycling is extremely popular) before coming into the province of Salerno. Mercato San Severino, a stretch in Salerno, an important administrative town with a rich history and heritage, the gentle climb towards the Costapiana Pass and then Cava dei Tirreni, the hometown of great journalist and La Gazzetta dello Sport editor Gino Palumbo, who had a special fondness for the Giro d’Italia.

The stunning beauty of the Amalfi Coast begins to unravel to full effect at Vietri sul Mare. The road is winding and uneven but the scenery is truly unique as the route passes through Maiori, Minori, Amalfi, Praiano and Positano. Then into the province of Naples and the climb at Picco Sant’Angelo which offers another breathtaking view, this time over the Sorrento Coast. Sorrento and Piano di Sorrento bring to mind Carmine Castellano, who took over from Vincenzo Torriani as Giro d’Italia race director, remaining in the post until 2004. Vico Equense, Castellammare di Stabia, Torre Annunziata and Torre del Greco follow, and then Ercolano, where the climb up Vesuvius begins.Together with Pompeii, the city is know all over the world for the eruption of the volcano that buried it under a river of lava in 79 A.D., and for the consequent excavation work that uncovered important details on the homes and daily habits of the time. The area attracts visitors from all over the world.

The area has always been highly coveted by the tourist industry with architecture of various styles belonging to various eras, particularly in the Miglio d’Oro (‘Golden Mile’), known as such for the unique beauty of its landscape. The area is also known for its multiple cultural and traditional events.

The climb up Vesuvius represents the last chance for defenders and attackers (to use footballing parlance) to square up to each other and improve or defend their positions. After the gentler first three kilometres, the final ten kilometres of the climb have a constant average gradient of 10%. The finishing line is located almost at the edge of the crater in an landscape that stands out for its lush vegetation and breathtaking panoramas across the Gulf of Naples below.

Vesuvius has already hosted two Giro stage finishes. In 1956 the great Charly Gaul won the 8 km uphill time trial, beating Tuscan Guido Boni by 37” and versatile Spanish sprinter Miguel Poblet by 39”. In 1990, the morning half-stage beginning in Sala Consilina and finishing at a far lower altitude, was won by Spaniard Eduardo Chozas, 26 seconds ahead of Bugno, who held the pink jersey for the entirety of that year’s Giro.

Whoever claims the pink jersey at Vesuvius will justifiably begin to believe that the final crown awarded in Rome is within his grasp.

After the Giro we'll get back to "regular programming": everything from A to Z about Italian cycling. Stories, including cycling trip stories, for the Italian Cycling Journal welcome; contact veronaman@gmail.com.
Posted by Angelo senza la o at 3:46 PM