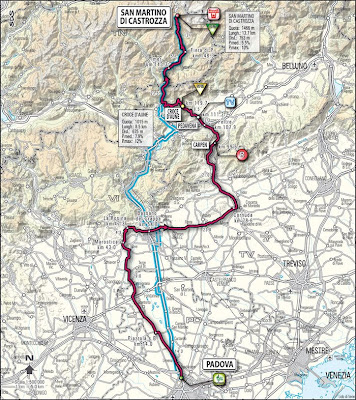 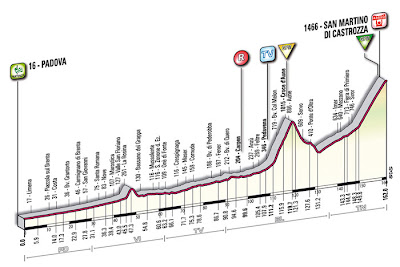 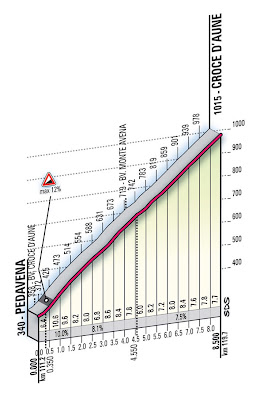 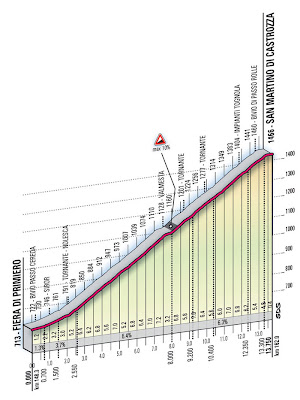 Tuesday, 12 May, 2009, Stage 4 official description:
Rich in history, monuments and culture in many and varied expressions, Padua hosts the start of this leg that finishes with a climb in San Martino di Castrozza, in Trentino.


The city presents a variety of styles and perspectives represented by the cupolas of the Basilicas: the Basilica del Santo (Sant’Antonio, but since Antonio is the patron saint of Padua he is the saint, by default), the Basilica di Santa Giustina, the long and low arcades, the willow trees on the banks of the river Bacchiglione, the amazing expanse of Prato della Valle, the biggest town square in Italy and one of the biggest in Europe (the first “velocipede” races were held here in 1800). And the list of sights continues: the Piazza delle Erbe, the Palazzo Comunale (Municipality), the Palazzo della Ragione, the Duomo (cathedral), Baptistery, Piazza dei Signori, the Cappella degli Scrovegni with its celebrated frescoes by Giotto, the Basilica del Santo with its wonderful bronzes by Donatello, and many, many other reasons for visiting this incredible city, not forgetting the famous Caffè Pedrocchi of course. Padua’s university tradition goes back centuries and, with its surrounding hinterland, the town is a vitally important centre for quality manufactured goods, agriculture and commerce.

The glorious Società Ciclisti Padovani, which boasts an exceptional hall of fame that includes Olympic, world and national titles aplenty (and especially on the track), is the jewel in the crown of the ever-vital and prolific Paduan sporting scene. This year the cycling club celebrates its 100th anniversary, together with the Giro d’Italia. The club is the organising body of an important annual race—the Giro del Veneto.

Predominantly flat terrain for the first two thirds of the stage, which passes through territory rich in cycling enthusiasm, famous cyclists and even bicycle-related industries. Piazzola sul Brenta, then we enter the province of Vicenza, passing through Nove, beautiful Marostica (pause to remember Giovanni Battaglin, winner of the 1981 Giro), the short climb of the Rosina hill (this road has featured frequently in the Giro and other races), with its cyclists’ chapel built by local “friends of the Giro” and, lastly, Bassano del Grappa with its unusual attractions, are the principal population centres before the province of Treviso. The route hugs the gentle ridge of hills, passing through Oné di Fonte, Maser and its famous Cherry Fair, the fork at Pederobba and then the province of Belluno. Then on to Feltre, Pedavena (the name of a famous beer and a famous stage of the 1964 Giro, with victory going to Tuscany’s Marcello Mugnaini), and then the Croce d’Aune climb. The invention of the modern rear-mounted derailleur was named for this climb: it was while climbing the then-unsurfaced Croce d’Aune (in 1927) that the great Tullio Campagnolo, then a young and modest racer, had the inspiration to design and manufacture the famous derailleur that made his name famous worldwide and blessed by all who use his derailleur sets. Tullio’s name is kept alive today by the Campagnolo company founded by him, and a monument commemorates the great cyclist/industrialist at the top of the Croce d’Aune.

We enter the province of Trento at Imer and then, from Fiera di Primiero, the real climbing begins: the cyclists pass through the provincial capital, Siror, and continue to San Martino di Castrozza (1,466 metres).

This elegant and attractive summer and winter resort offers skiing, Alpinism and hill-walking. It has a wide and varied range of natural resources as well as excellent hotels and extensive modern facilities. The majestic and magnificent summits of the Dolomite complex of the Pale di San Martino soar above the richly-wooded valley. Other sights of note in the area are the Rolle pass, the natural park of Paneveggio-Pale di San Martino, the summit of Rosetta, Tognola in the Alps, the Segantini alpine refuge and the lakes of Colbricon. Also of considerable note are the gastronomic specialties from the area.

The two previous Giro finishes here were won by non-Italians: in 1954 the Dutch Wout Wagtmans and in 1982 the diminutive Spanish climber Vicente Belda.

The first mountain approach and the first ranking: in any case, a key moment.

After the Giro we'll get back to "regular programming": everything from A to Z about Italian cycling. Stories, including cycling trip stories, for the Italian Cycling Journal welcome; contact veronaman@gmail.com.
Posted by Angelo senza la o at 1:30 PM