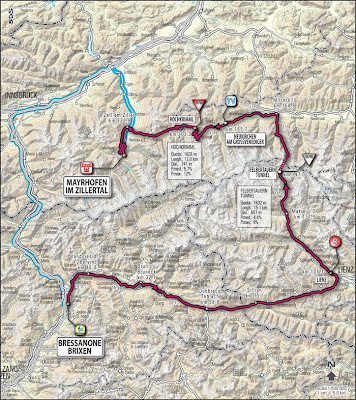 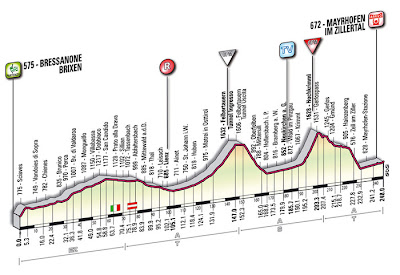 Thursday, 14 May, 2009, Stage 6 official description:
This stage ends in Austria, in Mayrhofen, in the Tyrol. The altimetry of the stage presents rolling countryside, with no features of note in the first part, while in the second part the itinerary includes two Kings of the Mountains.

Nothing really challenging, but the shape structure of the stage lends itself to displays from racers who excel at long distances, with good climbing abilities as well.

This is the first time that Bressanone and Mayrhofen are hosting start/finish lines of a stage in the Giro d’Italia.

Bressanone, in the province of Bolzano, lies at the confluence of two Alpine rivers, the Isarco and the Rienza. Nearby is the Pusteria road which, coming from western Tyrol, meets the state-run road from the Brenner Pass. The area enjoys a unique, open and spacious countryside with cultivated hills, woods and luxuriantly green meadows nestled between the looming shapes of the mountains standing out against the sky.

The old historic centre of the city conserves the severe atmosphere of its extremely lengthy past as the centre of a vast bishopric, founded in 1207 and which lasted for around eight hundred years. Pope Benedict XVI has spent his holidays here. This is the biggest repository of art in the Alto Adige, with architecture, monuments and artworks ranging from Romanesque to Baroque. The German ambience of the city reveals and characterises its vocation as a cultural frontier, with some unusual inflections. The tourist trail in the city centre takes in the most important sights, including the medieval Via dei Portici Maggiori, the Piazza della Parrocchia, the cathedral with its many artworks, and the palace of the Bishop Princes ,which today hosts the Diocesan Museum and contains a wealth of cultural, historic and artistic objects in many and varied declensions.

Recommended hill-walking excursions include the route to the City of Bressanone Refuge at 2,447 metres, on the south crest of the Plose massif. This area is very popular for winter sports as well, and it features scenic panoramas of the Dolomites and the Aurine Alps.

Immediately after the start, the stage crosses Novacella with its exceptional abbey, which contains many artworks and features buildings from various eras surrounded by meadows and vineyards. Then come Rio di Pusteria, San Lorenzo di Sebato, and Brunico with its characteristic crenellated houses and a profusion of flowers from the town’s balconies and windows. Of the Dolomite massifs in the surrounding countryside, one stands out with its imposing form: Plan de Corones (now a landmark in cycling geography) from which you can admire the Dolomites, from Cristallo to Sassolungo. Back to the Val Pusteria to pass through Monguelfo, Dobbiaco, San Candido and then, at Prato alla Drava, the crossing into Austria. The race continues to unfold against a stunningly scenic backdrop, passing through Sillian, Lienz (an elegant town boasting great cycling traditions, with numerous stages of the Giro d’Italia and the Giro del Trentino) and, after the climb to the first King of the Mountains, goes through the 5.3 km Felbertauern tunnel, reaches a brief inclination, and then faces another climb for the second ascent of the Gerlospass followed by the descent into Mayrhofen.

We are now in the district of the Zillertal Alps, in a wonderfully evocative Alpine countryside. The Ahorn and Penken mountains dominate the spectacular panorama, which also includes a number of lakes that reflect the colour of the surrounding mountains. The development of the final leg of this stage gives an extensive view of the evocative panorama of Mayrhofen and its surroundings. The skiing district around the Austrian town offers over 160 kilometres of ski pistes and modern chairlifts, with alternatives to satisfy all needs.

Here holidays, both in winter and in summer, offer the choice of a wide range of sporting activities using excellent outdoor or indoor facilities. And there are fully-equipped, relaxing health spas where you can get away from the rat race and recharge your batteries.

This is an area where cycling, on and off road, is extremely popular, and the recently-retired professional racer Georg Totschnig is a case in point.

After the Giro we'll get back to "regular programming": everything from A to Z about Italian cycling. Stories, including cycling trip stories, for the Italian Cycling Journal welcome; contact veronaman@gmail.com.
Posted by Angelo senza la o at 7:07 PM